When I do school visits to talk about my books, I have often been asked what are some of my favourite authors. This is a hard question, because I have such eclectic tastes. I like Science Fiction, Fantasy, Mysteries, Spy Stories, Adventures, Forensic Science stories, Historical Fiction, Teen Fiction and everything in between as long as I think it’s been well-written.

You might have noticed my historical fiction in the top left corner. James Clavell’s Shogun and Noble House were two of my favourites of all time. On the shelf below that are some very old books saved from my grandfather’s library, including the complete works of Shakespeare. Sprinkled among those are a few romance stories. I don’t tend to read romances as a rule, but I was trying to write one for a contest a while back and thought I should read a few to see if I could pick out the formula. The romance I did come up with was rejected because there was too much story and not enough romance. Go figure!

The shelves on the left contain my professional books as well as my husband’s, which also includes handyman & DIY books. (My man is quite handy.) Above the National Geographic magazines are my favourite Sci Fi and Fantasy stories as well as the ‘based on TV series’ stories (Star Trek, Babylon 5, Earth 2, X-Files, Stargate, etc).

Some of Clive Cussler’s adventure novels

Here is a stack of Clive Cussler’s rollicking Dirk Pitt stories. You may have seen the movie Sahara, which was based on one of his novels. As with any movie based on a book, there were definitely some inconsistencies. The most glaring was the producer’s choice for the actor who played Dirk Pitt. Normally I would not complain about any movie starring Matthew McConaughey, but he certainly isn’t the ‘tall, dark & handsome’ type that I had envisioned Dirk to be. 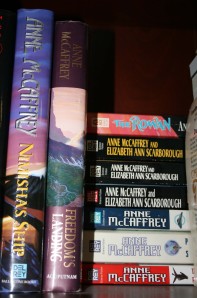 Hiding behind some of the other books are SciFi & Fantasy novels by Ann McCaffrey, one of my favourite authors in the genre. While I have never read her Dragon Rider series, I loved her Powers That Be series among others. I had the opportunity of meeting her when she came to WorldCon back in 1995. She was a kind and gracious lady whose talent will be greatly missed.

If you look closely at the bookshelf, again, you should see the photographs and the scrapbook of our Las Vegas adventures. When we were there in 2005, my hubby & I went to the Star Trek Adventure at the Hilton Hotel. What a trip that was! Hubby got his picture inserted into the Borg pic on the right. (Have you ever seen a Borg with a moustache? ha! ha!) I ‘joined’ the Enterprise crew in the picture on the left.

There are also books from some of my favourite local authors: Chris Rutkowski, Alison Preston, Karen Dudley and Michael Van Rooy. First, I will talk about Chris, our ‘Fox Mulder’ of Manitoba.

He investigates and writes about strange phenomenon such as UFO sightings, and Alien Abductions, among other things. His book, Unnatural History, includes information on the Lake Manitoba monster called Manipogo (something like the Loch Ness Monster). He also reveals local places where ghosts have been sighted, as well as discusses crop circles and alien encounters. He has even written a children’s book, I Saw It Too based on the eye witness accounts of children who have seen UFOs and alien creatures. He also writes a blog to keep his readers apprised of the current UFO sightings. (see the Blogroll below for his link)

Alison Preston, Karen Dudley and Michael Van Rooy are all local writers of mysteries but each has their own distinct style.

Alison’s books are set in the Winnipeg neighbourhood called the Norwood Flats. She has created a set of interesting characters who reside there and the unusual goings-on are investigated by one of Winnipeg’s finest, a cop nearing retirement, Frank Foote.

Michael’s books are set in Winnipeg’s north end, a seedier sort of neighbourhood which suits the ex-con character quite well. Montgomery “Monty” Haaviko is trying to forget his criminal past for the sake of his wife and baby son, but finds it difficult as his past often comes back to haunt him. I love his dry humour and his innovative ways of dealing with the criminal elements while keeping the police off his back. Sadly, Michael was taken from the literary world too soon, suffering a massive heart attack, so we will not have the chance to read any more of his brilliant adventures.

Karen Dudley’s books all have wonderful titles. Each one has a bird reference that is also a pun on a murderous expression: Hoot To Kill, Ptarmigeddon, Red Herron and Maccaws of Death. Her humour is evident, not just in the book titles, but also in the way her character, Robin Devarra solves the ecological mysteries. Each story revolves around a particular bird and their environment, which is being threatened by unsavoury people and/or corporations. Karen is currently writing a completely different set of books called Food For The Gods. If you would like to keep apprised of her activities, check out her blog (in the blogroll).

Well, I think I will wrap it up for now. Next time, I will discuss all the wonderful Canadian teen-fiction authors and the books of theirs I have on my shelves. Until then, happy reading…and writing!

3 comments on “My Bookshelf”