A friend and I usually have a ‘winter vacation’ together, which involves wandering around our local Conservatory – a building  that houses tropical plants. We plan our vacations for some time in February, but this year I ended up with Bronchitis so we agreed to postpone it. Well, spring came really early, this year. As a result, this is the first year we’ve been to The Conservatory when there wasn’t snow on the ground. It didn’t make much difference. We still had a great time wandering through the Palm Room and the Rock Garden. Both places have changed a little since the last time we were there.

In the Palm Room there is now a wooden platform and pathway that overlooks the fish pond and crosses through the middle of the space. The ‘Hobbit House’, which used to be closer to the fish pond, has been moved (along with his clothesline) to one corner. His mailbox was close to the walkway, so I left him a note: “Dear Mr. Hobbit; I am sorry you had to move because of the ‘freeway’ running through your property, but I’m glad you’ve found a new home safely tucked away in the corner. Sincerely, An Admirer”. I hope he appreciates the sentiment! lol

Along with the fish pond and the Hobbit House, there is The Mesa Garden with a giant stone head, reminiscent of ancient Central American relics. It is very cool.

Tucked into another corner is the turtle pond. It has been reconfigured so the shelled critters don’t wander around with the possibility of being stepped on. The last time we were there, they had put out signs telling us to watch our step as the turtles had a habit of escaping their pond and exploring. My friend said she’s had nightmares where she accidentally stepped on one and the sound of the ‘crunch’ would wake her up! Now she doesn’t have to worry! 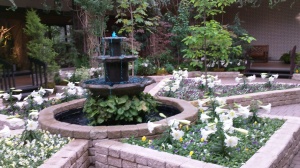 Beyond the Palm Room is the flower garden. They change it on a fairly regular basis. Once it was set up like Alice’s Wonderland with cardboard characters from Lewis Carroll’s book. This time, they had set up a fountain in the centre around which a variety of Hyacinths, Lilies, Pansies and many other varieties of flowers were planted. There is also a glassed-in area where they display their carnivorous plants – Venus Flytraps and a variety of Pitcher Plants.

There were a few very interesting flowers among the familiar plants, too.

Although there was no snow, the wind made it feel like winter, so wandering through all that greenery was a real respite for my friend and me. We sat for a few minutes on one of the benches placed around the space and just absorbed the tropical atmosphere, the humidity and pungent scent of peat moss. It was a very restful day. 🙂

Where do you go to get away from everyday life if you can’t afford to go somewhere exotic?