Although it’s been awhile since I’ve been on a school visit, last week I decided to follow the trail that my character took and take some pictures of the old historical sites. Eventually, I want to put together a slide show for the next time I’m in the schools or do a reading, so those who haven’t been out to Lower Fort Garry or St. Andrews Church will get a better picture in their heads about what things looked like. As much as I tried to describe the settings in the books, there really is no better way to show people a place than with pictures. For those of you who haven’t read ‘Withershins‘ or ‘Spirit Quest‘ let me give you a little background: (I’ve put the story line in italics and the historical information is in standard font.)

Michelle heads out with a couple of friends one Friday evening late in October to do research for an upcoming history project. They drive out of town a little way to St. Andrews Church, the oldest stone church in Western Canada.

It is located on the Red River that flows north from the United States and empties into Lake Winnipeg, which is much like an inland sea. At its widest point one cannot see across to the other side. 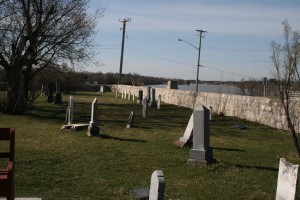 The first 2 pictures show the graveyard on the south side, where you can see the flowing river. It’s very low this year because of the mild winter we had. Usually, the Red River is much higher and swifter.

The next 2 photos show the north side of the graveyard.

Back to the story: The idea for the evening was to take down the names of some of the earliest settlers buried at St. Andrews and then research their lives. Michelle wanders through the graveyard making notes while the boys sit in an old tree, chatting about sports. 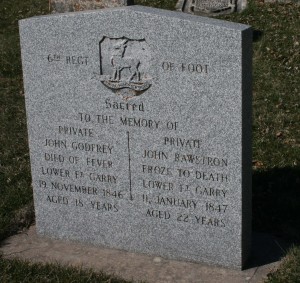 Although I don’t mention Michelle noticing the newer gravestone above, I do mention the deaths of these young soldiers of the 6th Regiment of Foot later on in the books. I also mention Michelle taking note of this stone coffin. You may recognize it as the Gravatar I used when I first started blogging, although I did crop out the other gravestones). Here is a close-up of the inscription on the sarcophagus. It’s a bit hard to read unless you click on it. You should bring up a bigger version.

When the caretaker tells the teens it’s time to leave, they head out to a local drive-in for dinner.

Skinner’s is a well-known establishment at Lockport, just outside of Winnipeg. It was so popular they even opened another one across the highway as well as a booth in The Forks Market food court. This is the original one, the one I used to go to with my parents as a kid. There used to be a carnival set up behind where the new Skinner’s is now located, about where the water slides are situated. It was a wonderful summer outing with the family – fun houses, carnival rides, cotton candy with a stop at Skinner’s for ‘The World’s Best Hotdogs’. I don’t remember whether they had all the hockey memorabilia lining the walls back then, but I do remember the jukeboxes in every booth. They still have them, although some of the songs have been updated. You can see the steel grid work in the background. That is the start of the bridge that spans the Red River and continues on over the locks.

Michelle and her friends go to the locks after dinner and watch the rushing waters.

In the early days, the Red River was a busy highway to The Forks, where the Assiniboine River joins the Red. Around the St. Andrews area the Red River was shallow (during the summer) and fraught with rapids. Often travelers would have to portage around them.

In the middle of the 20th century, the lock system was constructed to regulate the river levels so that boats could easily travel through this treacherous stretch of the river. It was also around this time that the Floodway was built to divert winter run-off and spring rains so the city would not flood, which has happened often in this ‘flood plain’. The reason for this is most of Manitoba was once covered by a huge glacier which carved out and became Lake Agassiz. Once the glacier  and the waters retreated, it left behind a couple of large lakes (Lake Winnipeg and Lake Manitoba), lots of little ones and a vast amount of prairie. While this is great for farming, when there is a lot of snow and heavy spring rains, the water spills out across the flatlands and floods acres of property, as well as towns or cities that happen to be in the way.

After listening to the roar of the locks, Michelle’s friend Jason suggests they go back to the church to try the withershins, a ritual where one runs around a church three times at midnight. Michelle protests because trespassing on church grounds after hours is illegal. 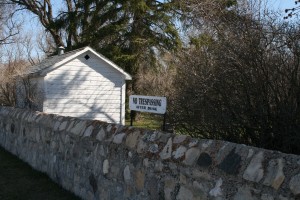 Her friends convince her to try it anyway. When she does, she is transported back in time. Since she is injured during the ritual, she is not sure what has happened to her. Nothing is familiar, so she seeks the assistance of an older couple living in a wooden house reminiscent of ‘Little House On The Prairie’. As it turns out, the man is the same one who will be buried in the sarcophagus, although he is not an Archdeacon, yet. Reverend Cochrane and his wife Annie, are worried about the gash on Michelle’s forehead.

The Reverend loads Michelle into a Red River cart (above) and bounces her off to Lower Fort Garry where a portion of the Sixth Regiment of Foot is residing along with an army doctor, who will attempt to patch up Michelle’s injuries.

As they approach Lower Fort Garry around dawn, Michelle recognizes the outline of the old historic site, although things aren’t quite as she remembers them. There were no fences around the properties on the outskirts of the fort and there were many more tepees in the space behind the blacksmith’s shop.

This is how it looks today (well actually, as of Thursday last week!). The wooden building in the foreground is the blacksmith’s shop. The house on the right is where the Chief Factor resided. For the purpose of my story, the fictional Chief Factor and his wife, the nasty Mrs. Wilson, lived here. Although the actual building had been demolished, a similar style old house has been moved onto the site so visitors can see what it looked like back then. The same goes for the Farm Manager’s house, shown here: 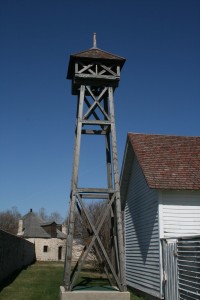 The Reverend brings Michelle through the river gate on the east side of the fort. Michelle looks up at the flagpole and notices that the British flag with the initials HBC, representing the Hudson’s Bay Company, is flying instead of the familiar red and white Canadian flag. Inside the gate, a trumpeter plays Reveille below a bell tower.

The bell tower, I believe, used to be inside the gate to ring visitors in for meals. It is now located behind the museum. The Hudson’s Bay Company, which at the time that Michelle visits, owned the trade rights in the area after buying out The Northwest Trading Company, it’s fierce competitor.

At the time of my stories, the HBC owned the area known as Rupertsland (the area that now encompasses Manitoba and parts of Saskatchewan, Alberta and northern Ontario, Quebec and Newfoundland). The Governor of the HBC was George Simpson, who was the man responsible for having the Lower Fort constructed. He lived in the Big House, the focal point of the fort. 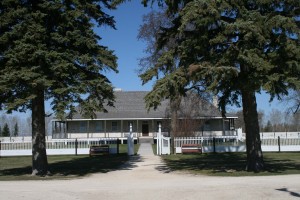 As with the out-buildings, it would not have had a fence during the time of Michelle’s stay, or the trees, for that matter.

To the left of the Big House stand the trade store and what is now the museum. I have seen old pictures that show a small building beside the trade store instead of the museum, which I use as Doctor Buchanan’s office.

The Reverend drives the ox-driven cart up to the trade store boardwalk, where they dismount. He directs Michelle towards the doctor’s office, but Michelle steps in manure. While she concentrates on the foul-smelling goo on her runner, she bumps into the handsome stone mason, Duncan McRae. Whether it’s her head wound or the effect of those big blue eyes of his, Michelle nearly collapses. Duncan swoops her up and carries her into the doctor’s office.

Duncan McRae was the stone mason in charge of building the St. Andrews Church for Reverend Cochrane, who was an Anglican minister. Later, Duncan built the Little Britain Church, a Protestant church, where he and his wife Charlotte are buried. The monument on the right bears their epitaphs as well as some of the generations that followed. The Little Britain Church is just south of the Lower Fort Garry historical site. It was built in 1853, six years after Michelle left the past and returned to the future.

Some of the other buildings in Lower Fort Garry include the barracks on the north side of the fort, the armory in the NE turret, the summer kitchen in the NW turret, the ‘men’s house’ where the voyageurs stayed when they brought goods in their long boats from the northern outpost of Norway House or from Upper Canada in the east. The SW turret is where I had some of the characters detained in ‘Spirit Quest‘, pending a murder investigation.

Since I was unable to go inside the buildings yet, I have to rely on photos taken with an old 35mm camera (without auto-focus) that were taken before I got my bi-focals, so a lot of them are pretty fuzzy and dark (the flash didn’t work too well, either). The museum is supposed to open on May 7th, so I will post some of the important indoor shots at a later date.

The Lower Fort Garry historical site is one of my favourite places. In the summer, costumed students and Historical Society volunteers play the parts of the former residents. They represent the era when Governor Colville and his wife lived here, which is a few years after Michelle’s adventures.

Do you have any favourite historic places near where you live?

Hello, fellow bloggers! Just a quick post tonight to tell you about an Australian blogging competition. One of the bloggers I follow on a regular basis – wantoncreation – has been nominated and is asking for votes. I’ve done my part by voting and thought some of you out there might like to do the same. If you’d like to learn more about the competition, press here. He will guide you through the simple process and give you a little more info on what it’s all about.

I am never disappointed when I read his blog. His posts range from poetry to book reviews to music to writing and I always learn something new and often get a good chuckle. I’ve nominated him for other awards in the past so I really hope you pop by his site, check out some of his past posts and are inspired to click on the VOTE button. His site is truly awesome!