Ironically, the letters in ERA were my father’s initials. As we signed the final papers to give up the family cottage today, I realized my time as co-executor to my father’s will is almost at an end. The cottage was the last piece of his estate to be finalized. The act is affecting me more than I thought it would. (sniff, sniff!)

My grandfather bought the cottage when my father was a boy. He and his brother spent many happy years there, swimming, playing tennis, golfing and just relaxing. On the left hand side of the cottage was a lovely screened-in porch. The huge windows on both sides of that corner caught even the slightest hint of a breeze, so it was often the coolest part of the cottage on those hot summer days. Before electricity was brought into the beach area, they used coal oil lamps and an icebox to keep things cold. When the power went out as kids we got a taste of living in that more primitive time.

When Dad took Mom down there before they were married. My mother fell in love with it. It became her favourite place in the world, her refuge from the hustle of the city. Here they are on their first anniversary – at the beach. The summer  after I was born, I travelled by train to the cottage because that was the only way to get there. A crude road was built the following year, which made it much easier to access the beach area without using the train. I spent my first summer at the cottage and every summer following that. When my brothers were born, Grandpa built a bunkhouse for us. Then the resort finally piped water to the cottages, so my grandfather built a bathroom onto the cottage. It was a nice improvement! We no longer had to use the outhouse – except in emergencies (if the other facility was being used).

See the tire I’m using? Believe it or not, that tire is still blown up after all these years. It will be one of the mementos I will be bringing back with me on our last trip down to the cottage later this week. My brothers used it and my kids used it, so it is definitely something I want to keep for my grandson – even if it is bright pink!

The resort area often had many different activities, like movies and dances at The Clubhouse, baseball and football games in the Sports Field. There were rummage sales and my favourite – The Masquerade.

One year, our parents made this terrific costume that all three of us could use. As we walked past the judges, our ‘patient’ turned his head all around to see what was going on around him and we got some pretty good laughs from the audience!

In the evenings at the cottage, we’d play cards or Bingo at the dining room table. On rainy days, we’d make card houses.

The summer I graduated high school, my boyfriend visited me often at the cottage and when we were married four years later, we spent the first week of our honeymoon there. When my grandparents passed away and my parents took possession, they enlarged it so that it would accommodate our growing family. This is what it looks like after 12 feet were added to the front. Inside, there are now two extra bedrooms and a sun-room with a bay window, where mom would sit and watch the variety of birds that ate at the bird feeders.

They ran into problems with the contractor and turned to my hubby for help. He’s the consummate handyman and knows how to install plumbing and electrical stuff – and he knows his way around a saw and hammer. I think that was when our infatuation with the place began to wane. As kids, we were carefree and did not have the responsibilities of maintaining the cottage. Once hubby and I bought a house in the city, it was a chore to have to help finish off the first addition and then Mom wanted to expand the kitchen.

By this time, Mom was no longer working, so was spending more and more time down there. We never got the chance to be down by ourselves, which was kind of important to us as newlyweds. Once our children arrived, they enjoyed being at the cottage with Grandma and Grandpa, but we usually had to abide by Grandma’s schedule which didn’t correspond to our family’s, at the time. The kids would get hungry and cranky because of later meal times. We’d have to rush to eat and then fight traffic on the way home Sunday nights. The arthritis in my hubby’s ankles started to act up so much that walking on sand was getting more and more painful – and the golf course didn’t have carts to make it easier for him to get around. Gradually, we stopped making the trip. Occasionally, when the kids got older, Grandma would take them down on the weekend of our anniversary to give us some alone time, but that was about it. 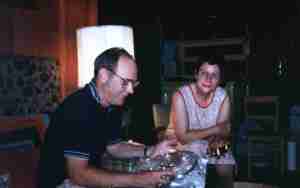 We might go down for the day to celebrate my parents’ anniversary or my other grandmother’s birthday and father’s day, but after Gram died, we hardly ever went out there. My mother’s health declined rapidly after her mom passed. Five years later, it was her turn. Three years after that, my Dad took his final breath. After his passing, there was a flurry of activity to de-clutter decades of stuff that had accumulated from two generations of pack rats. Since neither my brothers or I could afford the time and money to maintain a cottage as well as our own homes, or make the payments for huge taxes, we decided it would be easier to sell the cottage. It was also better than trying to update their house in town for sale. We thought the cottage would sell faster, too. Hubby and I bought out my brothers for the house in town so our daughter would have a place to live with her significant other, since she was attending university and their finances were tight. We couldn’t afford a cottage, too.

When the cottage didn’t sell that first summer, even after all the de-cluttering, we spent time the following summer de-cluttering some more and trying to figure out why nobody wanted this cherished abode that could accommodate 17 people when all the bedrooms, the bunkhouse and pull-out couches were utilized. My daughter was happy that it hadn’t sold by the time she was planning her wedding. It had been her dream to get married at The Clubhouse. It was a blessing that we still had the cottage to stay in while preparing for the big event. She made a beautiful bride! 🙂

Three summers later, still no offers! Not one!  Then, just before last Christmas, someone showed a spark of interest. What they offered originally was almost an insult to what we had originally priced the cottage, but the market had gone soft for vacation homes. We came down a little. They came up somewhat. When we wouldn’t budge any lower, they stopped negotiating, until a couple of weeks ago. They came back with another offer just below our last counter-offer, so we went down that little bit more to meet it and finally came to an agreement, more to be rid of the hassles and extra expenditures than anything else. As I reflect upon the deal, though, I feel a certain measure of regret. It will be tough seeing it one last time as we gather up the remaining treasures and say goodbye. 😦

Is there a place where you made precious memories that you now miss?