Do you see how the photo strip continues from page one to page 2? Only the left-hand side pulls out, though. 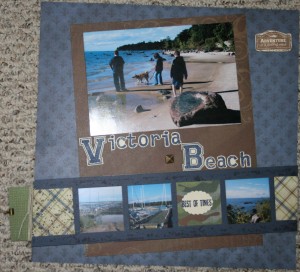 In this close-up of the first page, you will notice the pullout strip at the bottom. The instructions for this can be found in the Magic book. Look for ‘Hocus Pocus’. It is basically a three-part process with a bottom strip containing one fixed picture beneath the last picture. The middle strip contains 4 photos with the third one covered until you pull out the strip. Over both the middle and bottom strips is a strip of thick clear plastic (cut from either a sheet protector, a heavy Ziploc bag or a transparency) The top strip of card stock has had three ‘windows’ cut out of it to reveal the pictures on the middle strip. The plastic strips help the middle strip move in and out easily. 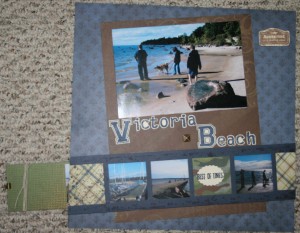 Here, the pullout is in the open position. Each photo used in it is 2-1/4 inches square. The top section shows a 5×7″ photo on a brown background (10-3/4 x 8-1/4″) placed on an angle. The Upper Case letters were stamped with the CTMH Varsity Letter set. The smaller letters were from a Recollections set. In the upper right-hand corner, I stamped “Adventure is a state of mind” from the Pure Adventure set. The “best of times” phrase is from the stamp set, which was included with the Workshop kit. The metallic stick-on square also came with the kit. 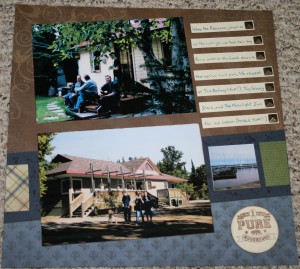 The second page includes the journaling – the details of the ‘adventure’ being portrayed by the pictures. Again, the square stick-ons were added to each strip of journaling. Both of the large photos are 5 x 7″. The small one on the blue strip is 2 x 2″. The background paper was cut 4-1/2″ from the bottom and flipped around (it’s two-sided printed paper) to create a layered look without the bulk of two different papers. The blue strip is stuck over the two pieces, holding them together. The back can now be used for more pictures.

Hope you found this worth the wait! 🙂

Today I had a lot on my plate. I worked all day, which was rather unexpected. A friend had asked me to work for her this afternoon. When I checked Subfinder (the automated substitute program) to find the job number, it said I was booked for the whole day. Thinking I had made a mistake or the woman’s appointment had been changed, I went in this morning. It turns out it was a glitch in the system. She really had intended to book me for just the afternoon. Since it was a system error, I had to stay and help out in one of the classes. This afternoon was Track & Field. It was a little chilly to be out watching the runners but I think my student had fun when it was her turn to run.

When I got home, I had to rush around to tidy up for the company I was expecting after dinner. I took a quick shower, (after running alongside my student, I really needed it!) then headed out to a retirement dinner. That’s where I really had a FULL PLATE!

We went to Tony Roma’s. Everyone had a great meal. Although they are famous for their ribs, (and I was told by those who had them that they were delicious!) I am partial to seafood rather than beef, so I had the Shrimp and Salmon Piccata baked in a lemon caper wine sauce with rice pilaf & broccoli. It was soooo good! Normally, I can’t finish a restaurant meal and usually come home with a ‘doggy bag’ but tonight I ate the whole plateful. I was hungry!

Afterwards, we invited the retiree and his family back to our place for cake (well, brownies, actually) and ice cream. I was so full from dinner, I decided against stuffing any more food into my stomach for fear I’d be unable to sleep.

All-in-all, with everything I had on my plate today, both literally and figuratively, I was unable to photograph and edit the pictures of the scrapbook pages I made last night, so I can’t show them off. The pull-out section we created for one of the pages was quite complicated. It took longer to make than a normal page. As a result, I was up quite a bit later than I normally would be on a night before working. I am quite wiped, so I’m calling it a night. I’ll post the scrapbook pages tomorrow – with any luck! 🙂

So, how was your day?