I have another couple of cards to share, but I will be brief today as I have to rush off to work later. Both are birthday cards, one for a young lady who loves to read fantasy, the other was for my grandson. 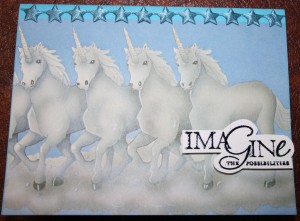 For the fantasy reader, I used a part of a large note pad I had that measures about a foot and a half (see picture at top of page) with a rainbow, clouds and unicorns. You may recall from a previous Crafty Wednesday that I used the rainbow half and one of the unicorns for a wedding card. This time I used the other half with just the unicorns. I glued this to a base of blue card stock and ran a string of satin hearts across the top. The sentiment is from Stampin’ Up‘s Word Play set.

Inside, I had some 8 1/2″ x11″ fancy ‘clouds’ printer paper, from which I cut a 3″ square and glued it down with a glue runner before applying the sentiment, which is also from Stampin’ Up. The eagle is from Close To My Heart‘s Pure Adventure stamp set and the pen is from SU‘s Rue des Fleurs set. All the elements were first stamped using a Versa Mark sticky pad and black heat-embossing powder, then attached with 3-D squares.

For Grandson’s card, I fell back to the Recollections Zoo set I originally bought to use for his shower invitations. One of the pet names I used with my kids was ‘monkey’ so when I saw this cute little guy, I had to buy the set. (I also wrapped his presents in paper with animals on it, including a monkey, so thought this would go with the ‘theme’). I stamped him with brown ink on white card stock and carefully cut him out with my small sharp scissors. I used a brown cream chalk and a Q-tip to give him a bit of colour.

I used white cardstock (8 1/2″ x 5 1/2″ folded in half) as the base. I cut a piece of blue paper that measured 5″ x 3 3/4″. The polka dot paper measured 4″x 3″ (I think) and used a glue runner to hold it in place on the blue piece. I wrapped a piece of green velour ribbon around the blue paper attaching it to the back with Sookwang (it has a very strong adhesive) two-sided tape and used this tape around all the back edges to hold it firmly in place on the white card stock.

Inside, I stamped ‘Happy Birthday’ (I think it was a bargain stamp from Michael’s) onto a 3″ square of polka dot paper, using Versa Mark and black embossing powder. I also stamped the vine (from the Zoo set I mentioned earlier) using green ink then used a Versa Mark sticky pen to fill in the outline and embossed it with green embossing powder mixed with green glitter.  I used a glue runner to attach the polka dot paper to the card beside the vine. I printed the sentiments onto white card stock, which I trimmed to size and used SU’s ticket corner punch on the corners. The sentiments were attached with 3-D squares.

That’s it for another week. I think next week I’ll share some of the pages I created for my Dad’s Memory Book about my Mom. Until then, happy crafting, everyone! 🙂