As promised, here is the other half of the old books on my shelves.

It was Dickens’ 8th novel, first published in 1850. As with most of his work, it had previously appeared in serial form. Although neither of my copies has a stated copyright or publishers date, the plainer one on the right does state that it is a reprint of the first edition printed by M. A. Donahue with a preface written by Charles Dickens ‘the younger’. The version with the black and gold label was printed by Grosset and Dunlop, New York.

On the shelf is another volume of Dickens – his Christmas Stories, including ‘A Christmas Carol’, ‘The Chimes’ and ‘The Cricket on the Hearth’. Again, there is no publishing date, but I do know that is part of a 24 Classics series with illustrations. Unfortunately, there are no credits listed as to who sketched them. It was produced by the World Syndicate Publishing Company, New York. The dust cover is a little ratty, but it has helped keep the hard cover clean.

My Dad’s mother loved poetry and had many volumes by various poets. Here we have a copy of Henry Wadsworth Longfellow, produced by McClelland, Goodchild & Stewart Ltd, Toronto. It was covered in soft black leather and embossed with gold leaf. There is no publishing date, but there is an inscription dated 1919. It really is a beautiful volume.

In the background, you can see three golden-coloured books. The thickest one is The Complete Works of Shakespeare. The other two books contain Robert Browning’s Poems and John Milton’s Poems. Both the embossed covers and page edges have been gilded. The three books were published by the Oxford University Press. Shakespeare and Browning were printed in 1919. Milton was printed a year later. 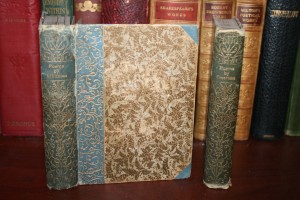 To the right are two volumes that include poems by Ralph Waldo Emerson and Walt Whitman. They were both produced by Walter Scott Ltd, London. The page edges are gilded as well as the embossing on the covers. Whitman’s book was inscribed in 1894 by my great grandmother before she was married. Emerson’s volume must have been purchased after she was married, as the inscription includes her married name.

I was surprised to see among the other books a narrow volume with the title Ancient Mariner by the English poet Samuel Taylor Coleridge. I have often heard it quoted, but didn’t realize we actually had a copy. It’s quite a pretty little book, published by Cassell, Peter & Galprin, New York with gilding on the front cover. It contains illustrations by E. H. Wehnert, Birket Foster and E. Duncan. It has no publishing date. 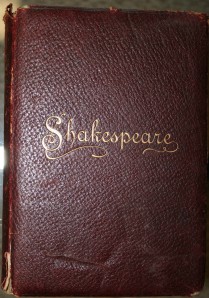 My favourite book on the shelf has to be this volume of the Complete Works of William Shakespeare. I love the red leather gold-embossed cover and gilded pages. The first inscription on the cover is dated 1897. It appears to have been a wedding present from Ross E. Cook to his bride May in 1908. How we ended up with this copy I’ll probably never know. Perhaps it was given to one of my grandparents by May. I just remember it being on their shelves for as far back as I can remember, so I’m thrilled to now have it on mine.

While cleaning out the cottage in preparation for its sale, we came across some treasures. The first is an old writing notebook that I think belonged to my grandfather.

It’s rather interesting how they learned cursive writing back then. They used these notebooks with sentences at the top of each page and lines beneath it where the student could copy the words in their best handwriting. I estimate it must be from the turn of the last century.

Another school book I came across was this one, my grandmother’s Home Ec notebook. On the inside cover, it contains two addresses where my mom’s mother had resided while she was still attending school back in 1920-21. 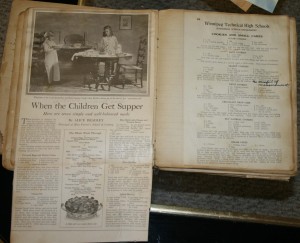 The notebook had some of Grandma’s hand-written notes as well as what appear to be typed pages from a cookbook or magazine. There was information on different types of food, where it came from, how to prevent it from spoiling and how to cook it. I found it rather interesting to read and learn how differently food was prepared back then – before all the artificial preservatives were put into food to keep it fresher longer. Some of the recipes looked pretty yummy, too! 🙂 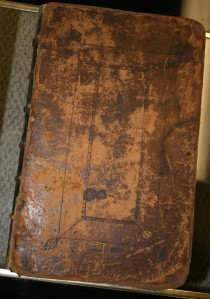 Finally, we come to the oldest book in my possession. The year before my father died, he had a visit from one of his Ontario cousins on his mother’s side. His cousin handed him a book that he claimed no one else in the family really wanted. The large volume, measuring 9 1/2″ x 16″, was wrapped in cloth, like an old pillow case. I assume it was wrapped to protect it, but I think the material kept in the moisture, as there is a fair amount of mildew damage, as a result. On the cloth, was written, “This bible is also on your Grandpa Harding’s side. It could be your Great-Great Grandparents’. It is old enough. 1704”. Whether the inscription was written by Dad’s cousin or his cousin’s father or mother, I’m not certain, only that it is old. 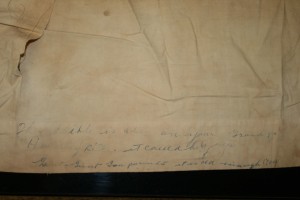 The inscription refers to it as a ‘bible’, but it is entitled The Works of Flavius Josephus. I believe this book pre-dates the King James version of the bible. There is a section, although not at the beginning of the book, that begins, “In the beginning, God created…” and continues on much like any other bibles do, today. 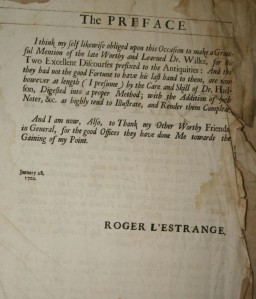 The preface was written by Roger l’Estrange, who provided the English translation of “The works of Flavius Josephus” and dated 1704. Apparently, it was later translated by William Whiston, 1737. (The link here is only one of many pages that discuss the book)

The illustrations are amazing and the book also includes many very old maps of the middle east circa 65 C. E. The book really should be skillfully restored and put in a museum, but there haven’t been any takers, so far who have the resources to fix it and a place to store such a relic. It really should be in a cold room so further mildew damage can be limited. I will continue my search for some place where it can be treated properly. In the meantime, I can lay claim to this ancient book and pray it doesn’t deteriorate and further.

Hope you enjoyed this peek at my old books! 🙂