Happy Sunday, Everyone! I hope, wherever you are, Spring is finally on its way!

Today, I’d like to introduce Megan Cashman. She was the first to respond to my call for writers to interview a few weeks ago. You may remember the snippet she sent me back during Scary October. Without further ado, here’s Megan:

Hi, Megan! Would you please begin by telling us a little bit about yourself.

I’m a freelance journalist from Staten Island, NY. I’ve been writing here and there for years, but last year I decided to finally become a serious author – and I did!

On your blog you mentioned you are an NA author. Please explain the difference between NA and YA. 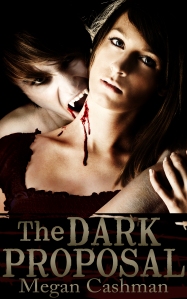 Tell us a little about your first novel, The Dark Proposal.

It is the first book in a trilogy. It is about how college graduate Claire McCormick deals with her boyfriend – who reveals he is a bloodthirsty vampire – forcing her to choose to become a vampire herself. The follow-ups will be about what becomes of Claire and the vampires.

What inspired you to write it?

A couple of things. One was when I used to daydream about a sexy vampire coming into my life, but then I realized vampires are evil so that fantasy wouldn’t be good. Also, I’ve always wondered how vampires deal with modern technology and everything used to track murderers these days. I decided to combine the two stories.

Do you rely on a beta reader or writer’s group to help you through the editing process?

Both. Writer’s groups are good for interacting with other writers and also to submit work as you produce it. Beta readers I believe are best for when the whole draft is done and you need someone to read the piece in its entirety in order to critique it altogether, not just chapter by chapter.

I chose to self-publish, mainly because I liked the idea of being in control of my product. I did a lot of research on how to go about the process. There are many good resources online, mostly from self-published authors who offer no-nonsense, practical advice.

What do you find so fascinating about vampires?

Their longevity. Immortal, centuries old characters are fun. Their supernatural powers. I also find it fascinating to wonder how they live separate from humans, yet lurk in our shadows. How do they see humans? What do they think of our world? It’s like another dimension, only it isn’t.

Were there any particular vampire myths that you referenced when writing this or did you create your own mythology about the vampires in your story?

I was strongly influenced by YA author Christopher Pike’s take on vampires in his The Last Vampire series. I read the books in junior high and really got into them. I liked the idea of a vampire being able to venture into sunlight on occasion – which is how Bram Stoker also portrayed Dracula, by the way. Pike also had his vampire to be able to consume human food and drink, only she didn’t really need it. I did the same for my vampires; they do it for necessity to hide their vampireness from humans. But I keep the pale skin, the ability to read minds, the ability to move around in mere seconds (think True Blood), and of course the fangs are there. Furthermore, I have a part in my book that explains who were the first vampires and how they came about.

Is there anything else you’d like to add before we say goodbye?

I have plenty of story ideas in mind – fantasy, historical fiction, even fiction about everyday life in our world. This trilogy is not going to my last work. 🙂

We look forward to your future works. 🙂

Thanks you for taking the time to talk to us, Megan. Good luck with your writing. 🙂