Today, I have a couple of very different cards, which both have a blue base or background. I used my D’vine Swirls embossing plate for the first card and Polka Dots for the second, running them through my Cuttlebug. Although the D’vine Swirls plate is the one that came with my machine, I think it’s the one embossing plate that I use the most, especially with winter-themed cards because it looks like swirling snow. The Polka Dots plate looks like snowflakes, so I use it fairly often at this time of year, too. 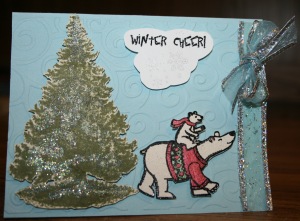 With this first card, I was experimenting with the packet of Mr. Ellie Pooh’s Elephant Dung Paper I got at the Zoo a couple of summers ago. Each sheet of paper was heart shaped so I was mostly using it for wedding, anniversary and Valentine’s Day cards. However, a blogging friend encouraged me to think outside the box, so I did. Along with the pink poop hearts, there were some sheets that were a cream or off-white colour, which leant themselves to other ideas. Above, the tree was stamped on the cream-colored paper. The polar bears were stamp-embossed on the off-white. The paper is not completely smooth and the texture works really well as fur. You will notice that I added a bit of sparkle to the tree and painted the sweater & scarf with my shiny paints. After adding a piece of sparkly ribbon to one edge and cutting out the sentiment to look like a cloud, the front was done. It might be hard to notice, but I also stamp-embossed snowflakes onto the sentiment ‘cloud’. In case any of you were wondering, the tree is from a stamp set by Stampin’ Up called Christmas Lodge and the polar bears and sentiments were from a Close To My Heart stamp set called Polar Bear Holiday.

The inside, above, shows another of the bears from the CTMH set, along with the sentiment & presents. Again, I used the poop paper for the bear and added the colour with my shiny paints. There is also a splash of sparkle in the way of stamp-embossed snowflakes on either side of the sentiment, which was cut out using a 2″ circle punch. 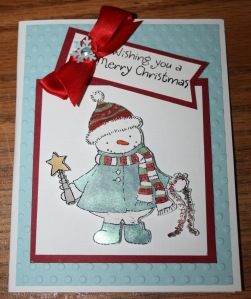 This card is my favourite. Not only do I love the cute snowman (Decorating Snowman by Inky Antics), who looks very festive in his shiny blue coat, but also because of the surprise on the inside. I stamp-embossed his outline, then filled him in with my shiny paints. I cut him out and placed him on white card stock with red card stock (cut 1/2″ taller & 1/2″ wider than the white) behind it. I stamp-embossed the sentiment on white card stock and placed it on red, cutting it so that 1/4″ showed on all edges. To the sentiment, I added a red ribbon bow, attaching it with a silver brad and paper snowflake before placing it on the card with 3D squares. 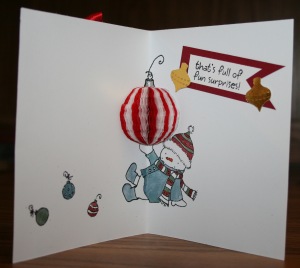 Honey POP (by Inky Antics) honeycomb paper is so much fun, because it flares out when you open the card and it’s not all that difficult to do. Last year, I made Christmas trees with the plain green Honey POP. This year, I found Peppermint Strip, a red & white honeycomb paper, which could also be used to make candy canes. For the inside of this card, I stamp-embossed the snowman image directly onto the card, lining him up with where I wanted the ornament to go. I also stamped the ornament hanger and assorted ornaments onto the card, then painted everything. The sentiment was done in a similar manner to that on the front of the card, but I added small ornaments cut out of sparkly paper with a mini Sizzix die-cutter & my Cuttlebug to embellish the sentiment.

Well, that’s it for this week. I’m off to do more crafting as there’s only 4 more weeks until Christmas & I’m only halfway through all the cards I need to make! Hope you’re all having a great day. 🙂