It’s official. My home town has experienced the worst winter in over a hundred years, according to our local newspaper. 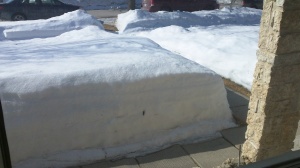 The Winnipeg Free Press quotes the national meteorologist, Dave Phillips, who says, “Nobody alive can say they’ve had it colder in Winnipeg . . . The story about this winter was the relentlessness of it. There was really no break. It was from the get-go. Even October was a half-degree colder than normal. Nobody had the look and feel of winter more than Winnipeg,” he said. “So if we award the prize for citizens who’ve endured the toughest winter, I think you guys would win gold.” 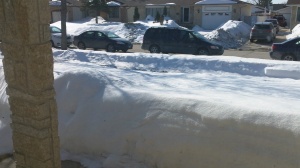 Another view from our front window.

There were days when we were colder than Syberia and even Mars! To read more about our record-breaking cold and snowfall, follow the link above.

Our back deck. For reference, our fence is 6 feet high.

And it’s not over, yet. We still have several feet of snow in our yard and had a few more inches fall yesterday. While we weren’t hit as hard as North Dakota & Minnesota to the south of us, or even east of us over the past few days, we are dreading what will happen when all that snow melts. With the Red River bringing in all that additional snow form down south, it’s anyone’s guess as to how high the flood levels will get. Our only consolation is the fact that the Floodway was recently expanded to hold more water, so the city itself should not be affected by floodwaters as much as the outlying areas.

Our back yard, with our trailer buried in the snow.

However, the frost has dug so deeply this winter that thousands of Winnipeggers have experienced frozen water pipes. As of yesterday, according to the Free Press, 2, 359 properties have been affected. “While the city has been successful in thawing some lines, it can’t keep up.” There are still 1, 363 property owners who are on the waiting list. Most of those live in older neighbourhoods where pipes were laid closer to the surface. Fortunately, our neighbourhood is only about 30 years old.

In the Free Press article it states, “Even with warmer weather, the ground remains frozen and properties will be at risk of frozen lines until late May or early June.” Those affected have been asked to keep their water running 24/7 until the ground thaws to avoid pipes being damaged by frozen water. Their water bills will supposedly be ‘adjusted’ once the crisis is over.

Oh, in case you were wondering if I took the photos above during mid-winter, be assured, they were taken from my windows a few moments before posting this. While some snow has melted since mid-winter, all this still remains – and it’s already April 5th! Is there any wonder why I haven’t felt much like blogging? 😦

So, tell me about YOUR winter.

20 comments on “Do you think YOUR winter was bad?”