Yesterday, my writers group and I launched our third anthology. The first was called Sex Death and Grain Elevators, because any story told about the Canadian prairies supposedly needed all three ingredients. The second was called, Where In The World Is Carmen Manitoba? which contained stories about aliens and UFOs because in the ’70s the town of Carmen was the home of Charlie Red Star, a strange red light that traveled the highway into town, attracting UFO hunters from all over the continent.

Off The Wall presents In The Woods is the title of our latest collection of fiction, poetry, actual sighting reports and photos of the elusive Sasquatch. The book was self-published using the Espresso Machine at McNally Robinson Booksellers. The Espresso Machine is a wonderful new invention that creates a book for you in about five minutes, right before your eyes! The machine, located right inside the doors of the bookstore, has glass panels through which you can see the pages printed, the cover printed and bent, glue applied to the binding and the whole thing put together. It really is amazing to watch!

Anyway, here are a few shots of the group, ‘Off The Wall’ – at least, those that could make it to the launch – flaunting their stories:

I was chosen to introduce the group and read first, along with my Sasquatch buddy Sassy. 😉 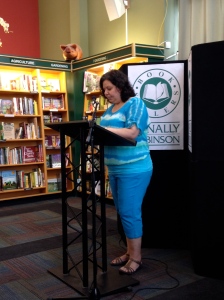 A life-long resident of Winnipeg, Fatima recently rejoined the group, (she was a member back when it first started). We hope this will be the first of many pieces of writing from her. She currently works as a Library Technician for an academic library, taking pride in helping her students learn how to search for creditable information. In her spare time, she enjoys reading, going out for walks, and writing posts for her own blog at stacksandranges.wordpress.com

Before home schooling her three children, Evelyn’s writing revolved around research, following her graduation from Brandon University. She has come a long way from work she termed ‘not interesting for anyone to know about’ to an accomplished writer and one of the original members of the Off The Wall group. She has published three books, Caught in the Web, I Am The Gatekeeper, and The Way of the Kyma, available on Amazon.

Cas Courcelles was unable to attend because of travel plans that were made before our launch date was set, but she was there in spirit. Cas is a Canadian author who summers on the level lands and winters south of assorted borders. She wrote Harliquin Romances for a number of years under the pen name Samantha Day but has since branched out into the suspense genre. Her novel, Down Dark Deep, can be found on Amazon and you can find her on Twitter @cascourcelles.

Our camera shy member, Russell Corbet, was also unable to attend. After a thorough University of Manitoba education in dead languages, Russell embarked on several failed careers: double-naught spy, professional shark bait, day care provider and cult leader. He now lives somewhere in the Western Hemisphere with a mortgage, a minivan, no cats, and a sage plant. He continues to be bent on world domination. 🙂 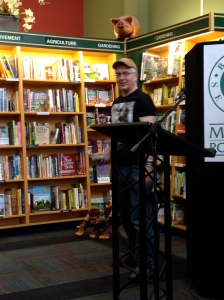 Chris is a Canadian science writer and educator. Since the mid-1970s, he’s written about his investigations and research on Ufos, for which he is best known. However, he has been involved in many other writing and media projects for more than 30 years, including TV specials (The Monster of Lake Manitoba, 1996), planetarium shows (Moonlight Serenade, 1983, and Amateur Nights, 1989) and newspaper columns, (Strange Tales, in the Northern Times, Thompson, Manitoba,1984 to 1985). He has nine published books on UFOs and related issues, a collection of short stories and has contributed to many other volumes, both fiction and non-fiction. His recent works include A World of UFOs (2008), I Saw It Too! (2009) and The Big Book of UFOs (2010). In addition, he is a book reviewer for the Winnipeg Free Press, appears often on TV and radio, teaches courses on Writing and is currently president of the Manitoba Writers’ Guild. He is on Twitter (@ufologyresearch) and blogs at http://uforum.blogspot.com/

Signing books for our fans.

We had a great time. The weather was lousy, strong winds whipping around buckets of rain, but that did not deter our family and friends from coming out to support us. We appreciate every single one of them! As well, we want to thank McNally’s for not only helping us through the process of getting the books printed but also for providing a space to launch the books and all the promotional stuff they did and will do. Wish you all could have been there, too. 🙂