About the only thing scary about today’s post is the number of times I used the word ‘look’ in one of my WIPs  – and maybe this photo! 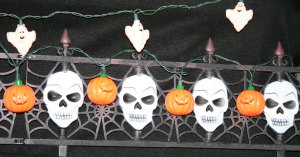 Matt over at wantoncreation has tagged me for the Look Challenge. I’d seen various other bloggers do this as well, so thought this would be rather fun to try, myself. The challenge requires me to use the ‘find’ feature of my word processor to search for the word ‘look’ in a chosen manuscript in progress, then copy and paste a few srrounding paragraphs. Since I’ve been talking a lot about my books, I thought maybe I’d share a bit of what I have started on the next one in the series, a story I have tentatively called ‘Revolution’, set roughly 25 years after the end of ‘Spirit Quest’ when Michelle has a daughter of her own.

I’m a little embarrassed to admit how many times I used the word ‘look’ – telling, instead of showing – but it is a WIP in its infancy, so I know this is one of the things I’ll catch in editing. Without further ado, here are three instances of the ‘tell, don’t show’: 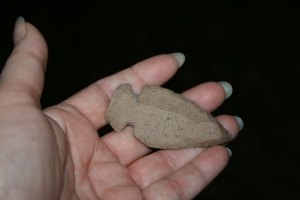 1) I think it’s all just a phony story to keep me from going to the concert. Well, it’s not going to work! I have some money from babysitting. I’ll go buy the ticket myself!

I stuck the arrowhead in my sock drawer.

I could tell by the look on her face that Mom was disappointed in me for not being drawn into her fantasy. Well, I didn’t care. I stormed out of the house, stalking the neighbourhood streets to work off some of my anger and frustration. My ‘Sweet Sixteen’ was supposed to be the best birthday, ever. Instead, all I got was a chunk of rock.

2) “So, how did this arrowhead transport her back in time? Supposedly,” Savannah added when she saw the look on my face.

“She did something she called the ‘withershins’. She said it refers to a ritual where one runs three times around a church at midnight. The friends she tried it with said they might meet the devil or be transported to the Netherworld. Mom claims that running counter-clockwise sends you back in time, clockwise will bring you back to your own time. Pretty far-fetched, eh?”

“Actually, I have heard of that, some kind of urban legend, but it does sound pretty wild, all right,” Savannah agreed. 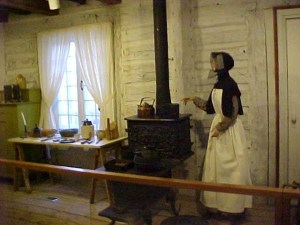 The kitchen inside the St. Boniface Museum

3) “You are hurt,” the Abbé observed. “Come. The sisters will attend to your injuries.”

I nodded, not willing to say anything more at the moment. He invited me inside the large two-storey structure, which looked suspiciously like the old St. Boniface Museum. Before stepping in, I took a quick glance towards the river. Bishop Taché, he’d said. The street that followed along this side of the river was named for the man – a street that did not exist, yet, I noticed. There was only a mud trail.

Hope you enjoyed this little insight into the next segment of what I think of as my ‘Red River Adventure’ series. Now, I have to challenge a few of YOU! The following are those that I haven’t tagged for anything yet or, at least, not for awhile, so here you are – if you dare!  (hehehe, evil cackle!)

Stories About My Life, 92% True

You should all pop over to see what they’ve been doing, lately. 🙂

In other news, over a month ago, (I’m ashamed to say), Storyteller In The Digital Age sent me another Liebster Award, which I will address tomorrow. Sorry about the delay, Amanda. Since I’ve dedicated this month to members of my writer’s group and have consistently had excerpts on Fridays, following up with interviews on Sunday, I thought this challenge would take precedence over the Liebster Award. My ‘look’ excerpts today will reflect my character interview on Sunday. Since no one else from the writer’s group responded to my interview/excerpt requests, I thought I would interview my character, Michelle, from my first two books. I’m still trying to decide if I should interview her as if she had just returned from her adventures in the first two books, or if I should interview her as the mother of Kristen, who will be the main character in my next book.

What do you think? Should I interview the teenaged Michelle or Michelle, 25 years later?