Hello, fellow crafters! I finally downloaded my scrapbook layout pictures onto a new flash drive. I hope this one lasts longer than the previous one! (Warning to J. D. Ryan, if you dare to read this, you will see spiders here – but only teeny weeny ones!)

Although this scrapbook layout can be found on the tab My Scrapbook Pages (above), I thought I’d feature it today, since it fits in with the theme for the month. The layout was done at a Close To My Heart  workshop and some of the stamps, (the spiders, mostly) were from the demonstrator’s set entitled ‘Creepy Cobwebs’ (from the Autumn/Winter 2010 catalogue). On top of each spider, we glued small and larger black beads to make the bodies stand out.

As you can see, it uses a lot of dark paper and card stock that comes with the ‘Mischief’ Workshop On The Go kit (Autumn/Winter 2011 catalogue). We used white pigment ink for the spiders’ webs and contrasting white/patterned paper with a journalling strip that was stamped with lines. Over on the far right, you’ll see a pocket with a tab that says ‘PULL’. This is what you will find when you pull it: 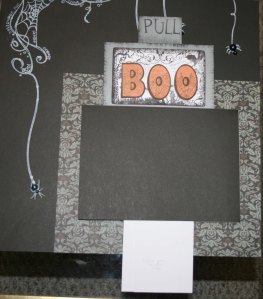 This was a complicated piece of engineering to get both the top and bottom to come out. The technique involves strips of plastic from a Ziploc bag and some strong two-sided tape. You can place a photo on the dark outside of the pull-out as well as a smaller one on that little white square (see below).

The ‘Magic‘ book by Jeannette R. Lynton has all the details on how to create this and other fabulous scrapbook features, like the ‘Waterfall’, which can also be found in My Scrapbook Pages.

Behind the ‘BOO’, we stamped the image from the CTMH stamp set ‘Backdrop – Charmed’. The letters were created with stamps from the ‘Posterboard Alphabet’ set – brown ink on orange card stock with partial cobwebs also stamped onto the letters. The word ‘PULL’ was created with the ‘Cocktail Alphabet’ stamp set.

One of the other techniques we used was the shiny embossed spiderwebs along the top of the white strip. First, we stamped the patterns using the Versa Mark sticky pad. After sprinkling on the clear embossing powder, we heat-set it, then smudged gray ink around the area with a sponge so it looks a little dirty. The ink won’t stick to the embossed areas, so the clear white cobweb pattern shows through. Pretty cool, don’t you think?

I finally got around to adding the pictures of my Grandson’s first Halloween to show you the finished project.

“What on Earth is on my foot?”

As you can see, I filled in the journalling strip with details of Grandson’s first Halloween. On the opposite page is the pull-out section when it’s closed. I love the ‘What a fright’ embellishment. The sentiment was stamped onto orange card stock then stuck behind the felt self-sticking frame. It certainly goes with Grandson’s expression, doesn’t it? 🙂

And here’s the additional picture along with the ‘Boo’ pull-out, which also shows what Grandson is staring at.

Hope you liked my scary crafting! 🙂

I’ll bet the title for today’s post made you think about Valentine’s Day, didn’t it? Fooled you! Today, I want to talk about scrapbook layouts and the company that I’ve been supporting to do my layouts is . . . Close To My Heart. While Stampin’ Up seems to cater more to card-makers, CTMH caters more to those die-hard scrapbook makers who take the time to make their photo albums works of art.

One of the reasons I haven’t posted anything over the past couple of days is on Wednesday I went to my sister-in-law’s place (45 minutes out-of-town) to pick up the workshop packages I missed when I was sick. She showed me how to make four of the six pages they’d made those two days. (I will post pictures on my new page My Scrapbook Layouts. You might even get to see a shot or two of my grandson!) The thing I love about my CTMH Representative is her creativity. Colette Dunlop can take the ordinary page and make it super-special by adding unique elements like photo ‘waterfalls’, memento envelopes, slide-outs for photos & journaling and fold-out sections to add interest to the page. A lot of these moving elements can be found in the book Magic, by Jeanette R. Lynton. As you can see in the photo, there is a foldout segment that can hold more photos than just a standard photo page. The most interesting of these elements is the ‘waterfall’ that I mentioned earlier. Pull on the edge and the pictures unfold, much like a waterfall. Very cool! There is also another pull-out that I like. Pull on one edge to reveal two pictures, one from each side.

Another reason I didn’t get a chance to post anything yesterday is I was so exhausted from my ‘rampage’. Even though we took it pretty easy since my bronchitis doesn’t seem to be entirely cured, yet, it was a pretty full day – breakfast at Sal’s, a saunter through the mall where the Children’s Hospital was holding its spring used book sale, a stop at the new Scrapbook Cottage and finally cheesecake before heading home. While that may not seem like too stressful a day – which it wasn’t – it just took a lot of me, physically. On the bright side, I have a new series of books to read: The People series by Kathleen O’Neal Gear & W. Michael Gear. Has anyone else read them? They look like they will be similar to Jean Auel’s Clan of the Cave Bear series. I also picked up James Clavell’s Whirlwind, sequel to Noble House. I loved his other Asian saga books, including Shogun and Tai Pan. That should keep me busy for awhile (once I finish reading Kathy Reich’s book Spider Bones). Each of my ‘new’ books must be three inches thick! Well, I guess that’s it for now. I will hurry and post my scrapbook pages on my new page for your enjoyment.