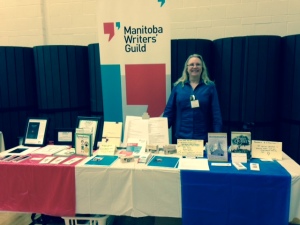 This past weekend was very busy for me! Both Friday and Saturday, I manned a table at two very different events to promote the Manitoba Writers’ Guild and next Friday I will do the same at ComicCon, for which I am very excited!

On Friday, my cohort, Jodi Carmichael (author of Spaghetti Is NOT a Finger Food) and I talked to English Teachers attending the annual SAGE conference. We also shamelessly promoted our books! (By the way, next spring she will be launching her teen novel, Forever Julia, so stay tuned for that book launch.) During the conference, we had one person renew her lapsed membership and sold one of our Writer’s Blocks – our infamous fundraising gimmick. I sold 2 of my books (Jody sold most of the ones she’d brought with her!) and I  gave away all but one of my business cards, so I’m hoping to be asked into many classrooms during this school year. 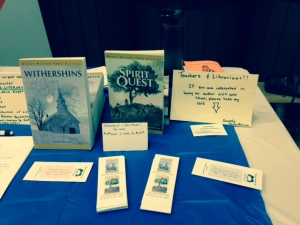 On Saturday, fellow board member, Donna Besel, and I attended the Mamingwey Burn Survivor Conference. On the table, we had a sign I created that read, “Everyone has a story. Let the Guild help you tell it.”, which became our theme for the conference. We took turns popping in to the conference room to listen to what some of the survivors had gone through and how they courageously chose the difficult road to recovery, ‘turning their demons into diamonds’, which was the conference theme for this year. 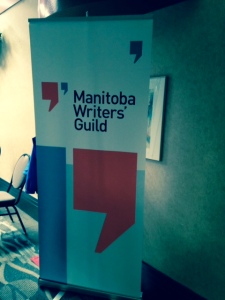 Those of you who have been following this blog for the last couple of years will recall me telling you my brother-in-law’s story and how he came to live with us after he was badly burned when his van caught fire. The organizers of the conference asked him to talk about his ordeal on a panel with three other survivors. He told his story with his usual wry sense of humour, knowing that laughter is the best medicine.

Donna had been asked to give a talk and was prepared to get everyone started with writing exercises, but she had no idea how many people she would be speaking to – over 80! She thought that only those who really wanted to write about their experience would be in attendance. While she was a little nervous at the change in expectations, she took it in stride and had many compliments about her workshop. Many attendees were interested in our programming and we gave away a lot of brochures and a few membership forms.

This coming Friday, I look forward to rubbing shoulders with celebrity guests and authors at ComiCon. It should be a blast. As another fundraiser/promotional gimmick for this event, we are creating a Colouring book with sketches of Manitoba Authors with which the attendees should be familiar – and if they are NOT familiar with them, they will be by the time they colour in all the faces! We at the Guild are trying hard to promote our many local writers of all genres.

Oh, and one last tidbit of information! By Friday, my writers group and I are hoping to have our chapbook, In The Woods, published in e-format so it will be available on-line, as well as sell hard copies at ComicCon. As soon as the e-version is available, I will pass along the details.

So, how was YOUR weekend?